By Laurence4 June 2021No Comments 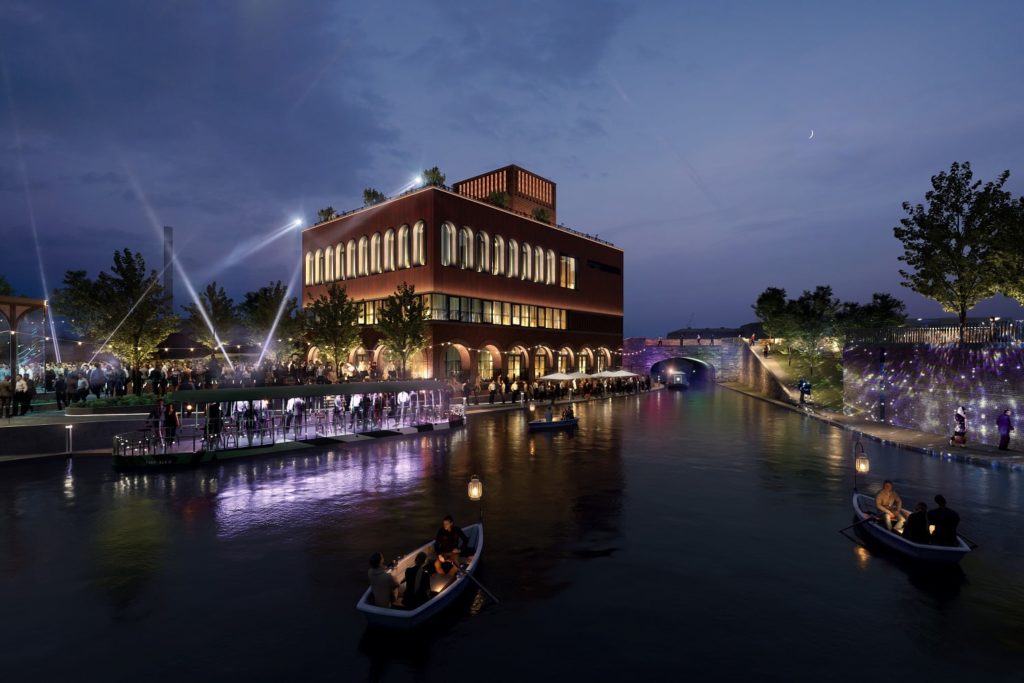 More new images of the proposals for The Island Quarter in Nottingham have been released as part of an event which marks the progress of works on Canal Turn, the opening phase of the development.

The images show an updated masterplan for the site, which showcases increased amounts of green space and the positioning of the currently active phases in the wider context of the site.

This event was the first chance to welcome guests onto the site since work stated in November 2020, with lockdown restrictions limiting outdoor social gatherings.

Robert Ware, chief executive at Conygar, commented: “We’re thrilled to have been able to welcome people down to The Island Quarter to see both the progress that is being made at Canal Turn and the wider plans for the site.

“Canal Turn will be a true entertainment spot for the city, with event spaces, restaurants and panoramic views across the waterfront. When completed, it will open up the canal basin area, enhancing one of the city’s most under-utilised assets.”

Plans for the opening phase include a bandstand and a substantial area of new, attractive public space, which will link with a network of public realm and access routes for pedestrians and cyclists. The Island Quarter masterplan has been designed with a full lifecycle of uses, including hotels and hospitality, office space and community living, along with green spaces.

Mr Ware said: “The Island Quarter is one of the biggest projects of its kind in the UK and is a huge part of the regeneration of Nottingham’s Southside. The masterplan images released today reiterate the scale of what we are trying to achieve with the development, as we look to create something that will make the city stand out on a national and international stage.”

As part of the development of the site, Conygar has applied for Homes England funding and is in the process of exploring the Levelling Up Fund, which is designed to support investment in places where it can make the biggest difference to everyday life.

Cllr David Mellen, leader of Nottingham City Council, said: “It was great to see progress on The Island Quarter site and to get a sense of the scale and potential for the area. Conygar has some really exciting ideas for what is a huge site, which will become a significant new destination as it develops.

“The mixture of proposed developments for The Island Quarter will really complement what’s going on elsewhere in the Southside area, reanimating this part of the city as a place to live, work and play. It’s transformative developments like these that put Nottingham in a strong position to bounce back from the pandemic and forge a bright future.”